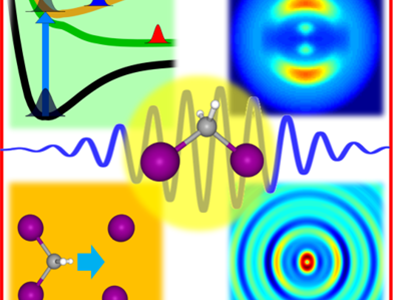 Pump-probe measurements aim to capture the motion of electrons and nuclei on their natural timescales (femtoseconds to attoseconds) as chemical and physical transformations take place, effectively making “molecular movies” with short light pulses. However, the quantum dynamics of interest are filtered by the coordinate-dependent matrix elements of the chosen experimental observable. Thus, it is only through a combination of experimental measurements and theoretical calculations that one can gain insight into the internal dynamics. Here, we report on a combination of structural (relativistic ultrafast electron diffraction, or UED) and spectroscopic (time-resolved photoelectron spectroscopy, or TRPES) measurements to follow the coupled electronic and nuclear dynamics involved in the internal conversion and photodissociation of the polyatomic molecule, diiodomethane (CH2I2). While UED directly probes the 3D nuclear dynamics, TRPES only serves as an indirect probe of nuclear dynamics via Franck-Condon factors, but it is sensitive to electronic energies and configurations, via Koopmans’ correlations and photoelectron angular distributions. These two measurements are interpreted with trajectory surface hopping calculations, which are capable of simulating the observables for both measurements from the same dynamics calculations. The measurements highlight the nonlocal dynamics captured by different groups of trajectories in the calculations. For the first time, both UED and TRPES are combined with theory capable of calculating the observables in both cases, yielding a direct view of the structural and nonadiabatic dynamics involved.